Summertime Festivals can be HOT.

When I’m hot, the last thing I want to do is stand over a stove to cook, or worse yet- build a campfire. Perhaps you have jelly legs from dancing all night, or a severe case of “couch lock” (camp chair lock?).

I used to be optimistic and bring supplies for at least one hot meal every fest. Like clockwork, that meal would be carted back home after every festival. More often than not, the food would then get tossed out because it’s soggy, or of questionable safety due to ice shortages.

I stopped wasting my money (and valuable cooler space) during those sweltering months and came up with my simple no-cook menu.

Think of it as continental. All of these items are basically “grab and go”, and easy ways to get some energy in you before you’re totally awake. 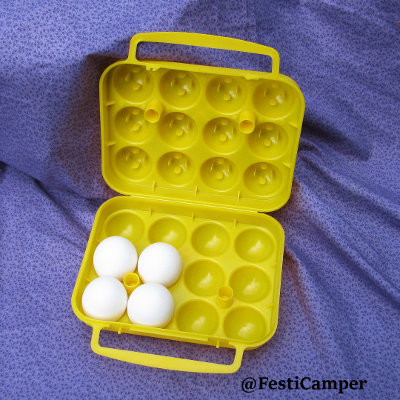 Except on the hottest of mornings, coffee is my one exception to the “No-cook” rule; I’ll break out the camp stove and boil water for coffee. I’m not equipped to interact with humans pre-caffienation in order to buy it.

It’s unlikely (but possible) that you’ll be camped within reasonable walking distance of a decent coffee vendor with espresso drinks.

It’s likely that you’ll walk >15 minutes, then stand in line >20 minutes for coffee made by The-Guy-Who-Sold-You-Grilled-Cheese-at-3am-Last-Night.

It’s entirely possible that when you reach the front of the line, they will have just sold the last cup. Grilled-Cheese-Guy will suggest you step to the side while he brews a fresh pot, in the crusty drip-coffee maker you suspect used to be white. This ancient machine shares a power strip with 3 electric skillets, 2 strings of twinkle lights, and a boom box playing “Bob Marley’s Greatest Hits”. While you wait, you try not to notice that GCG hasn’t washed his hands between making change and throwing strips of bacon on the griddle. When finally your cup is presented to you, GCG (Should I ask his real name? We’ve spent so much time together…) chuckles when you ask about cream and sugar.

So that, children, is why we always bring our own coffee. 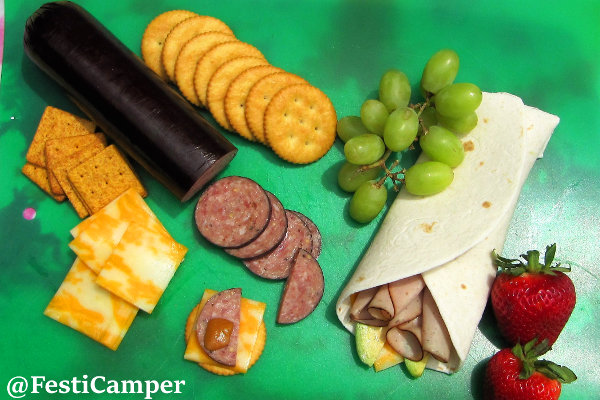 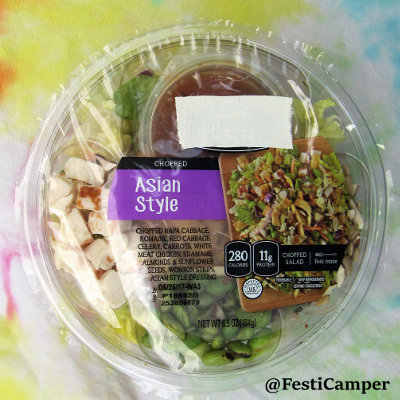 More than likely, your weekend will be sporadic grazing sessions as opposed to formal mealtimes.  My favorites: 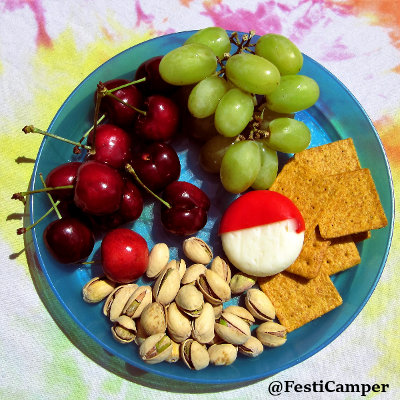 Foil packs. So warm, so yummy, so deliciously lazy. My kind of cool-weather festival eats. Sitting around the campfire, eating straight out of the sooty metal pouch.

The good news is: many fests will allow small charcoal grills, which cook foil packs more consistently, anyway. There are many portable and disposable charcoal grills on the market, or you could make your own from dollar store parts.

2. Install a Bacon Barrier (TM) in the bottom of your foil pack.

What is the Bacon Barrier (TM), you ask? 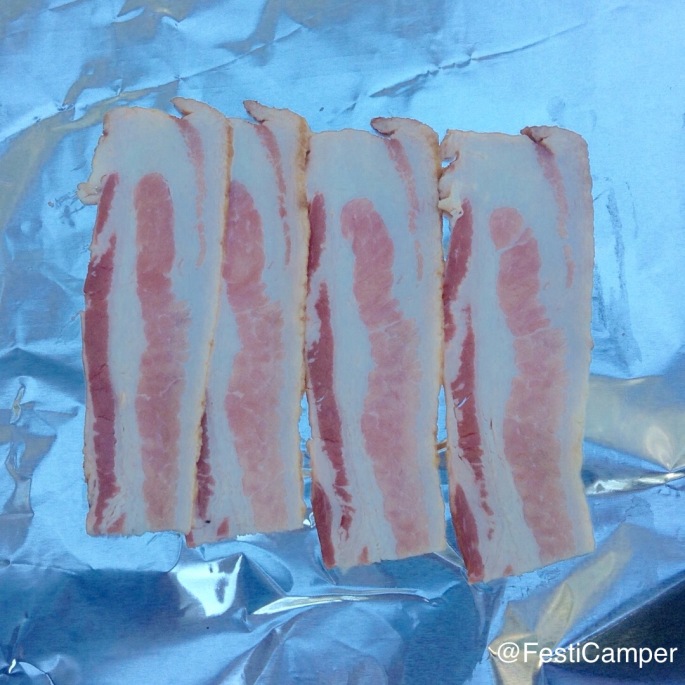 It is the insulation you’ve been looking for. Increased flavor, decreased burn loss. I have yet to find a meal that isn’t improved by a little bacon grease (and side of bacon).*  Which brings us to: 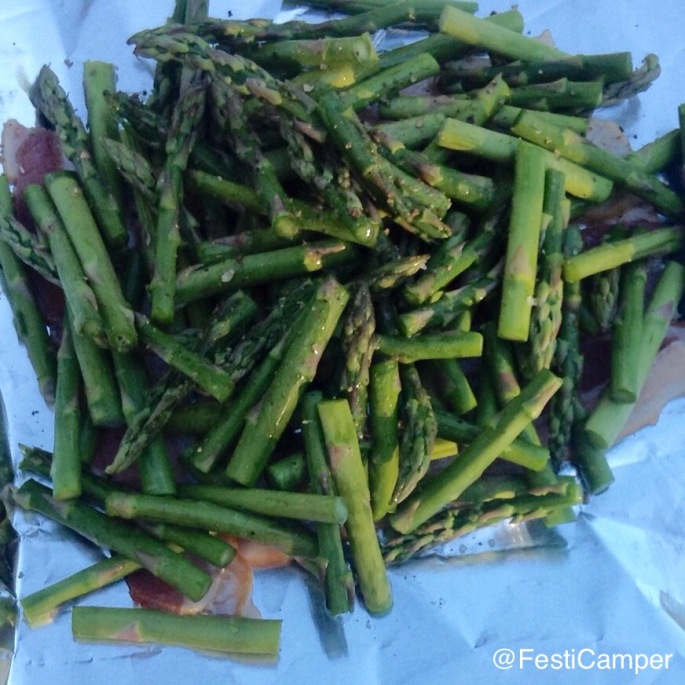 Until Bacon Barrier (TM), the asparagus foil pack had an expected mortality rate of 25%. Now? The bacon layer under your veggies makes it 100% edible.  (You’ll have to believe me, the family was starving, and foil pack asparagus is like mana around here…)

I see you under there, beautiful…

Yukon Gold is right.  You can see the crispy (i.e. perfect) bacon peeking out near the top.

This only works if the bacon is on the bottom! If you attempt to mix bacon into the middle of your foil pack (the steam zone), it will be floppy, soggy, and possibly under-cooked.

Place packs toward the outside of the charcoal bed, rotate (but never flip!) every few minutes.

After approximately 15 minutes remove from fire and let stand for 2-3 minutes. 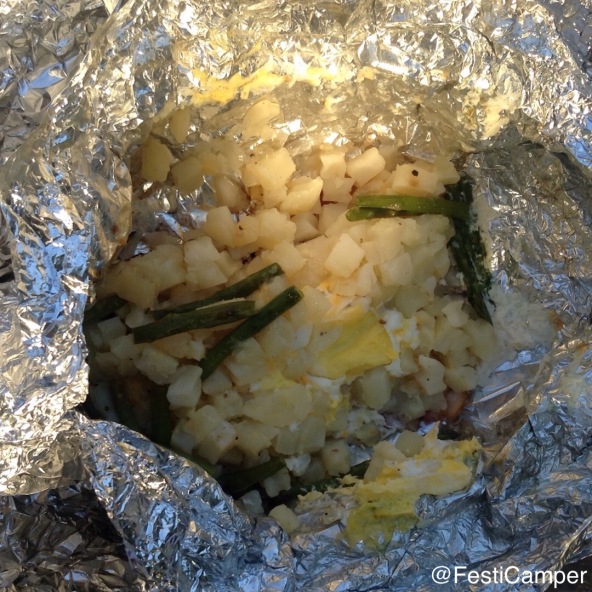 Do you see a face in there, or is it just me? 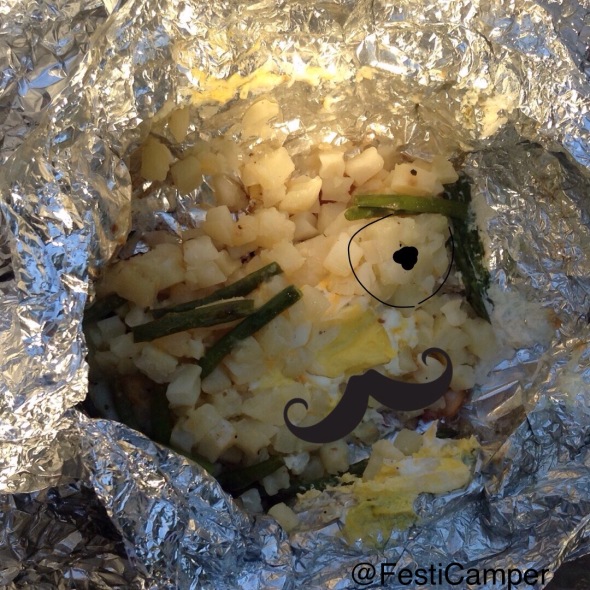 He’s winking. I think he likes you.

Lets face it. After a long, hot day of wandering around the festival grounds, you’re not going to want a lot of prep or cleanup. That’s the whole point of foil pack cooking, right? By far the easiest prep for the biggest bang, 1 smoked sausage + 1 bag mixed veggies of your choice = 4 to 6 very happy campers. 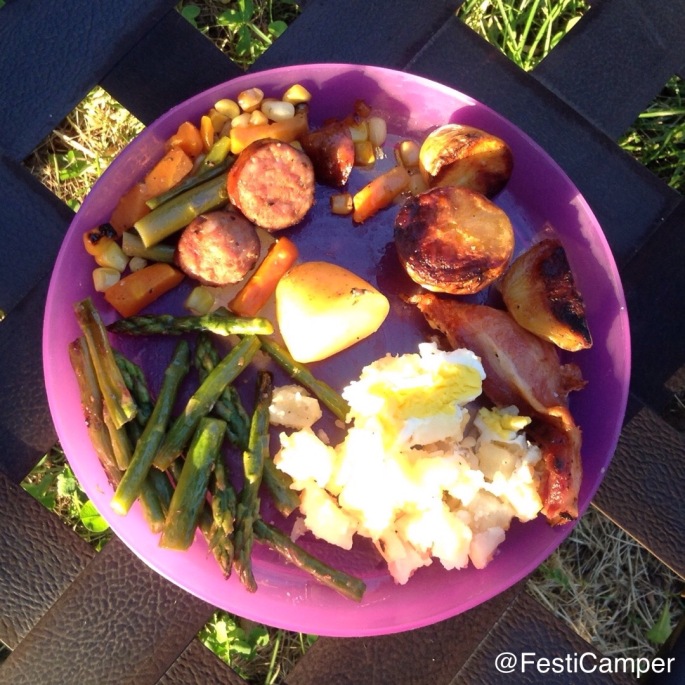 To which I reply: